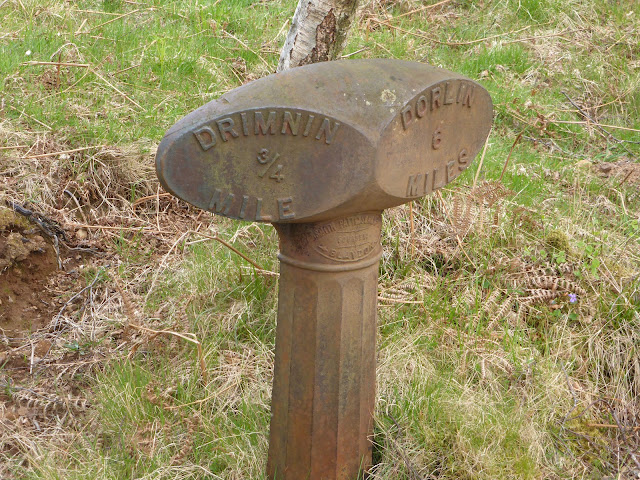 One of the signs that bikepacking in Scotland has become a lot more popular is the proliferation of routes being published and discussed online. Living in Aviemore, I'm very aware that many of the more popular options pass close by and there are other areas that are getting a similar level of attention.  However, it's still possible to find some rarely-visited little corners of the country and one of these is Morvern, south of Ardnamurchan. Together with Ardgour they form a wonderful but relatively little visited area. Being devoid of Munros they've escaped the attention of much of the hillwalking community and being surrounded by the sea makes visiting them slightly more complex. I'd also been attracted to the area when trying to fill out my long-term plan of cycling Scotlands coastline and had come up with a couple of routes in the area. With an atypical long dry spell in progress it looked like this would be an ideal option for Shaun and I to get our May bivvy out of the way.


Meeting first in Corran we drove to Strontian for lunch. It was a superb day - the West Highlands bathed in sunshine.  Sitting outside the cafe there was certainly a temptation to cancel the planned ride, drive to Sanna and just bivvy down on the beach. We gave in though and set off along the road for 9km or so to reach the route I'd planned.

It all started off well enough. A rough track led down to a steading - where it promptly disappeared into a field. Through that, we soon met the line of the old track and were alternately pushing and riding as best we could manage. It was fun in that sort of "what a great day to be outside" kind of a way. I knew we were heading for a point on the map marked as Lurga where there was a ruin. It turned out that this was the remains of an old lead mine.

I'd hoped that the track might improve from there but the opposite was true. We were relegated to mostly walking until we came upon a second building at Crosben and a good track out from there. Here, Shaun managed to catch a deep puddle and he fell into a mix of mud and cowshit. Thankfully we emerged from this section of track at Acharn old bridge over a decent river and he was able to wash most of it off.


After a very short road section, we had easier tracks past the castle at Ardtornish and then onto an old road alongside Loch Aline and the clay mine to Lochaline ferry terminal. A ferry had just docked and we were lucky to find the little snack bar just minutes before it closed for the day.

From here, I'd plotted our route along the quiet road. I was aware that an almost-parallel off-road route existed in the forest just inland but I preferred the chance of decent sea views. In the late afternoon sun we were treated to carpets of harebells and the thick coconut smell of gorse flowers.

At Drimnin we ran out of tarmac and set off along an old "destitution road" to Doirlinn.

After an initial very steep and very loose climb (a deep gravel had been laid down as the estate is building a distillery) it settled into a lovely track, climbing and descending round many corners, each revealing a different view of the Ardnamurchan peninsula. 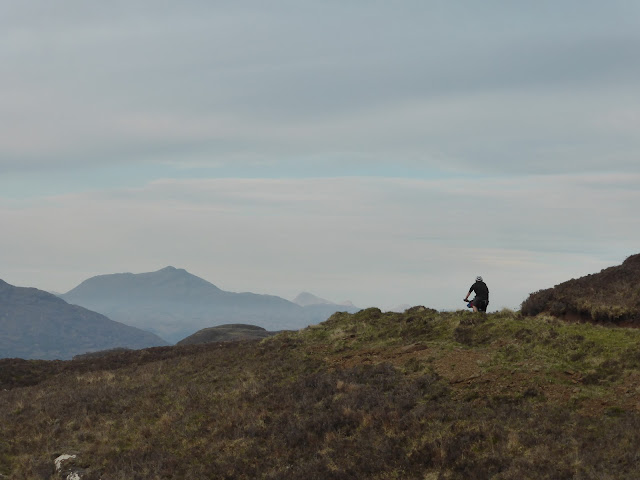 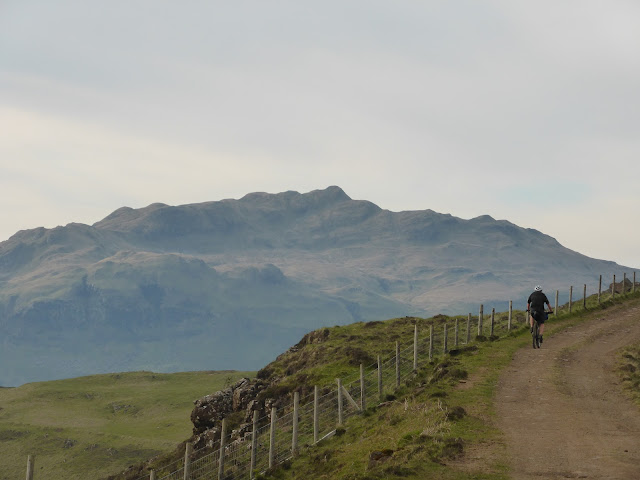 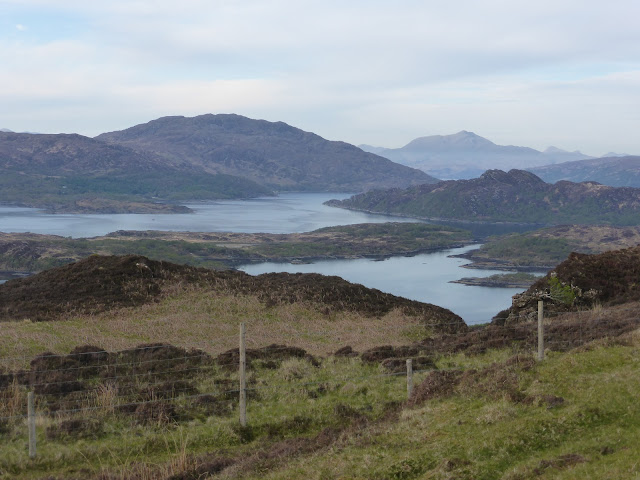 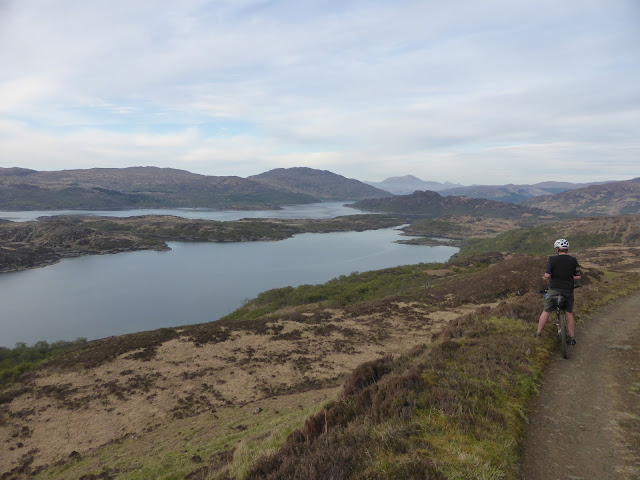 The warm temperatures hadn't abated much and Shaun was beginning to run low on water. We also knew we'd need to top up for dinner and breakfast. A check of the map showed a reasonably large river ahead - well, it needed a bridge - so that became our target. Unfortunately the river turned out to be out of reach down a mossy, steep-sided gully. Another look at the map showed one more burn before our planned bivvy spot, this one with a house (or ruins) beside it. When we got there, the house turned out to be in good condition and obviously occupied. I knocked on the door and was greeted by a kindly lady we later christened "Mrs Friendly". We chatted for a while, about ferries, about access, about the number of folk passing by, and she invited us in for a cup of tea. That caught me out. I wasn't sure if she was merely asking out of politeness and accepting was therefore impinging further upon her self-imposed exile, or if she was keen for company. In any event, I declined on the basis that we still had a bivvy spot to find before it got dark.

She seemed surprised that we were planning to bivvy at Doirlinn and when we got there we understood why. Apart from the immediate vicinity of the old Drovers Inn, the land was covered in heather, bracken, gorse and birch scrub. What's more, we could see nothing of a potential continuation of the track that we'd need in the morning. After a few minutes scouting around in the scrub - both Shaun and I collecting numerous ticks as we did so - we decided to camp in the front "garden" of the old building.


Over dinner we were able to watch a couple of otters swimming around before they retired for the evening and as the sun set and the air cooled down, we followed suit. Now, I normally sleep really well outside, especially if I've been riding for a while, but this was the most sleepless and restless night I can remember. It seemed that I barely slept between vivid dreams - dreams that were all to do with me camping outside this building. I'd hear noises, people speaking, dogs, footsteps and all the time I was in fear, frozen still, eyes closed in my bivvy bag. I'm not a superstitious person but the feeling was definitely one of a haunting. Maybe this was why Mrs Friendly was looking at us a bit odd?

Once Shaun was awake we agreed we'd head off before breakfast while the ticks were still stupefied by the chill of the night. We could hear forestry machinery up the side of the loch somewhere and surmised that was on our route. We located a wee bit of track leading away from Doirlinn and headed through the scrub as best we could, lifting the bikes where necessary, pushing our way through, trying to spot signs that anyone else had been this way. After a couple of hundred metres we spotted a wooden pole, then another. Someone had obviously tried to mark out a way through. A few hundred metres later and we came to a wider and more defined track. Still barely rideable though, so more pushing ensued, some of it through thick gorse.

Eventually we reached the forest road and a chance to make a bit of distance. Shaun refilled his water bottle and we set off between massive woodstacks, evidence of the ongoing forestry activity.

Once we'd hit the forest track, we made good time up to the head of Loch Teacuis and decided this was a good spot to have our postponed breakfast. From here, we could also see across the loch to the location of the next planned section of the ride. I was less than impressed. After an initial track, it appeared that there was no sign of anything amongst the grass and bracken and the thought of a long push uphill in the heat of the day - only to be followed by a long push back down again - was enough to put me off.

Decision made, breakfast eaten and bags re-packed, we therefore set off along another very quiet road, completing a short loop of the small peninsula before striking back uphill on the road for a fast descent and short flat spin back to the cafe at Strontian.

The route we did had much to commend it. I'd certainly consider it as a decent day ride, some of the tracks would be much more manageable with unladen bikes. As for the section we avoided, it appears there might now be another circular route, made possible by recent forestry works. Maybe a return visit when it's just a wee bit cooler! 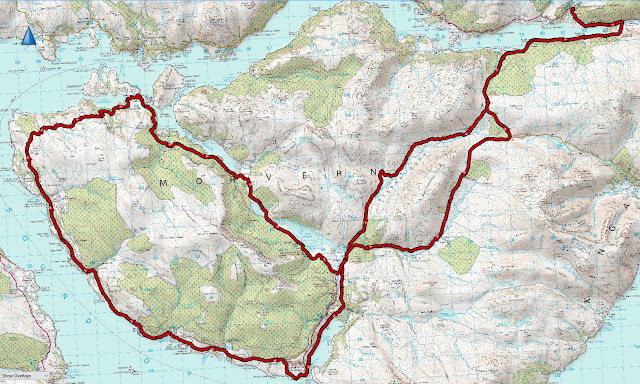 Posted by Scotroutes at 21:40 No comments: