I've been thinking about this one for a while. Last winter I did a couple of longer evening rides with a few mates, Carlisle to Edinburgh and Berwick to Edinburgh. That left me with part of the triangle to complete - the Coast to Coast. As it transpires, this is also a route I wanted to do as part of a longer term project. So, I looked at train timetables, selected a route and then waited. On a few occasions I'd dig out the plan but somehow it just never quite happened. Often it would be the weather but usually something else would pop up. With the clocks about to go back, I thought I'd better get the finger out and get on with it. Inevitably, the weather once again decided to play games with me. The first snow flurries of the winter arrived once I'd booked the hotel and train.


Day 1
Undaunted, I was up early but really not feeling that great. Unrested, dodgy guts and a hoarse, dry throat weren't the ideal start to my day and it didn't get any better sitting on the train to Carlisle.

Leaving Carlisle station looked promising - lots of NCN stickers to follow. Unfortunately, they weren't followed up and I spent some time exploring a car park and various back streets. Eventually, I let the GPS guide me until I started to pick up the NCN7 signs again and they took me all the way to Gretna for the obligatory photo stop.


This is the River Sark - the official border on the West coast and immortalized by Rabbie Burns in his song "Parcel o' Rogues".

(I should point out, for the benefit of my English friends that they are not the rogues in this tale. That would be the Scottish gentry that sold our independence for money.)

Leaving Gretna took me to Gretna Green and the famous blacksmiths shop. In reality, I was more interested in the nearby cafe as I was, by now, gasping for my second coffee of the day. Little wonder when it was already after 11am.

Setting off again I was starting to get worried about the ride ahead of me. I was already behind schedule and I just couldn't get my riding funk on. In one way I was happy to reach Canonbie. This lovely wee town is placed just where the terrain changes from the gentle river flats to the hillier terrain we normally think of as the Borders and that was the issue. I knew that the riding was due to get a bit tougher. Is have been less concerned if the projected South-westerlies had put in an appearance instead of the bitter Northerly I was experiencing. Still, the scenery was lovely, it was dry and sunny and before too long my planned stop at Newcastleton was upon me.
There was already 3 cyclists in the cafe. Hardcore, older types with all the gear. I asked where they were heading, to which the reply was "home". Brilliant. They seemed impressed by my plans though.

I knew that there would be little chance of finding any more facilities for a while and hoped that necessity would push me on. The climb from here up to Wauchope would be the first real push of the day but it mostly went in OK. Passing the little car park at the top of the climb was an important little milestone of my trip. Up until now, all the river systems had been draining into the Irish Sea. Now, I was in the Tweed system, draining into the North Sea. This then is the Druim Alba - Scotlands Watershed. In theory, it's downhill all the way from here to Berwick. However, I knew that I had a couple of hurdles to navigate before I'd be there.

The first issue happened almost immediately. Here, on the north side of the hills, the sun hadn't got round to melting the overnight snow and I hit the first patch at some speed, trying not to panic and keep a nice gentle, curving line round the bend. I did take the precautionary measure of unclipping my feet ready for a bale-out but it proved to be unnecessary and I just took it a bit easy hitting blind spots.
The descent to near Bonchester Bridge was enjoyable, if a bit cold and, the climb to Carter Bar was a lot more gentle than the route adopted by the A68. I was, however, completely done in, struggling to keep it moving and watching the daylight slowly disappear. It was a feeling more of relief than pleasure that hit me when I eventually pulled in to the Border car park for another photo.
My GPS told me it was now 17 miles to my hotel and, as it was already well after 4pm, I knew I would have to push on a bit to get in before dark. Fortunately, the first thing in front of me was the fast switchback descent of the A68. This took me quickly to the Hownam turn off for more little lanes away from the main road. On the way I passed over Dere Street - an ancient Roman Road and one of the very few off-road "roads" in Scotland.

This is certainly a very quiet corner of the world and as dusk descended I was keeping a count of how far it was to each farmhouse! Eventually, and after almost missing the last turn, I made it to Morebattle and the Templehall Hotel. I'd not quite needed my lights, but it was close.

Day 2
After not the best nights sleep, I awoke to see the extra hour of daylight passing by outside my window while I waited for breakfast. Obviously not as cold as yesterday had been, it was now quite damp with a light drizzle evident as I was prepping the bike for action. My first port-of-call was Kirk Yetholm which had been my original destination (had the Border Hotel not been fully booked). It's a really lovely little village and stands at the end of the Pennine Way, on the St Cuthberts Way and now also marks the start (or end?) of the Scottish National Trail too. 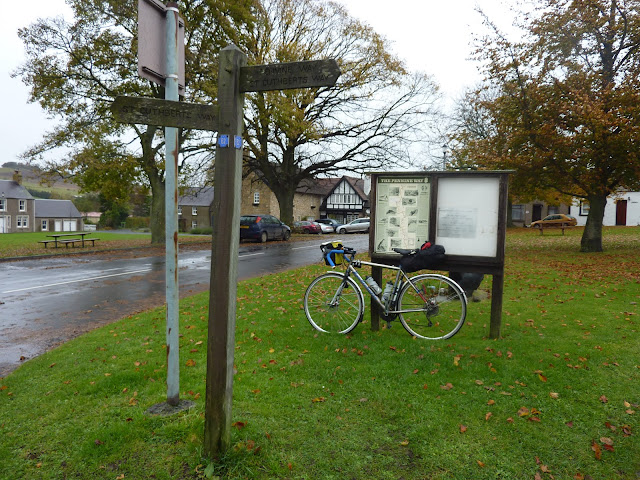 My self-imposed route now took me on a long, winding detour around this very pleasant little corner of Scotland, the game here being to run as close to the border as I could without crossing it or taking any u-turns. This meant I'd see signs for, e.g. Coldstream 8 miles, but I'd be heading away from them taking in extra lanes and side roads. The South Westerly that had been promised yesterday had now turned into more of a North Westerly which had me puffing a wee bit as I fought against it but once I reached Kelso and my first brush with the River Tweed, I had a fantastic blast all the way along to Coldstream. Here, the road crosses the Tweed again marking another important part of the border. 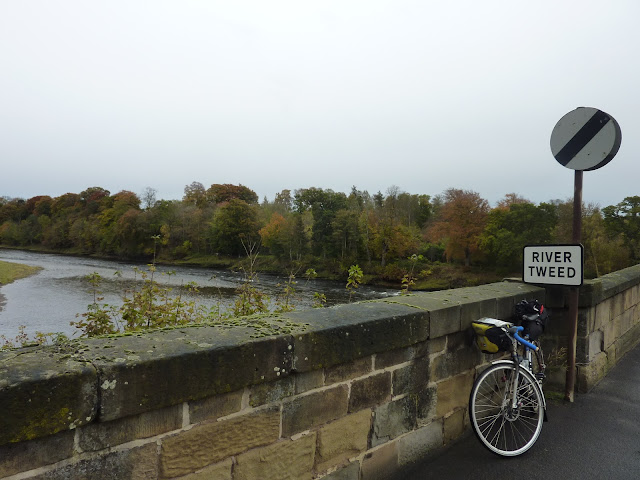 From Coldstream, I was back onto quieter roads with some beautiful old houses tucked away, large gates lodges and ornate gateways marking out some quite extensive grounds. In theory, I should have turned North after reaching Paxton but as Berwick-upon-Tweed sits astride the river where it meets the North Sea and gives its name to Scotlands most South Easterly county I thought it was only right to grant it honorary Scottish "citizenship" and grace it with my presence. It was quite a shock to suddenly see so many folk. It was still a damp day but the town was fairly heaving with both locals and tourists and I was lucky to get a seat in the Cafe Nero to enjoy a decent coffee and some hot food.


So far, I'd mostly had a relaxing comfortable ride and as I started North out of Berwick I was looking at my clock, pleased at my schedule. That didn't last long. The first problem was that my plan to follow the coastal path and avoid the A1 immediately came unstuck passing a large caravan park. The ground was rough and extremely muddy which had me slithering along. Progress at this rate would have me out another night. I therefore headed back onto the A1, taking advantage of a pavement all the way to Marshall Meadows. A quick enquiry to a local told me that the path here was even less likely to be ridable so it was back onto the A1 dual carriageway to the Border Viewpoint then off to cut through Lamberton. This left me with only 3 miles of so to get onto the Burnmouth exit towards Eyemouth. 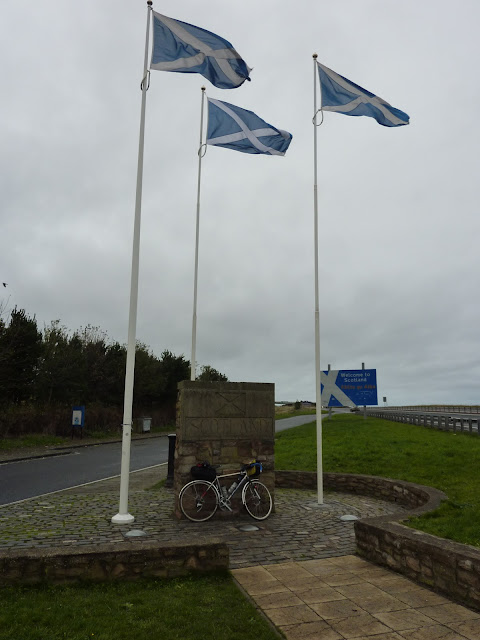 By now, I was beginning to feel quite tired. The headwind had picked up a little but I just didn't seem to be generating any power. This was worse when I exited Eyemouth towards Coldingham where the moor just seemed to be one long climb after another. I'd approach each bend sure that this was the last climb, only to see the road still rising in front of me. As I slowed, the daylight slowly leaked away and around 15:30 I opted to switch some lights on for safety. Eventually, I reached the top of the moor and could see a long downhill ahead of me but, more importantly, the coastline and various landmarks all the way to journeys end at Dunbar. 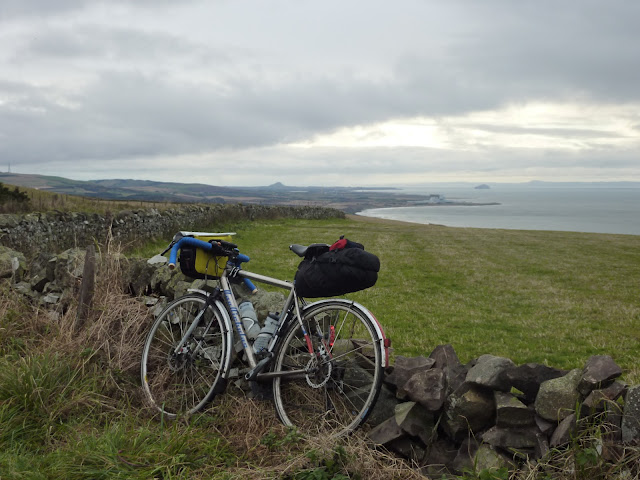 I was so intent shooting down the hill, intent on making up some time, that I almost missed the GPS telling me I had a right turn to make. This was the junction for Pease Bay and as soon as I started down it, I was wishing I had actually missed the turn. Rather like one of those quaint Cornish coves, here the road dove steeply down to the sea. A ford at the bottom looked crossable but I opted for the safety of the footbridge before heading steeply back up to cliff-top level again. Cruel.

Navigation from here couldn't have been simpler - just follow the NCN signs first along one side of the A1, then cross at Torness, then along the other side until a lane appears that takes you on a strange little detour round the back of the cement works. Of all the NCN routes I've been on, this surely has to count as one of the most bizarre!!  Finally and just as dusk was truly settling in, I made it to the railway station at Dunbar where the staff were happy to let me bring my bike into the waiting room, put my feet up and relax almost semi-unconscious until the train to Edinburgh arrived. 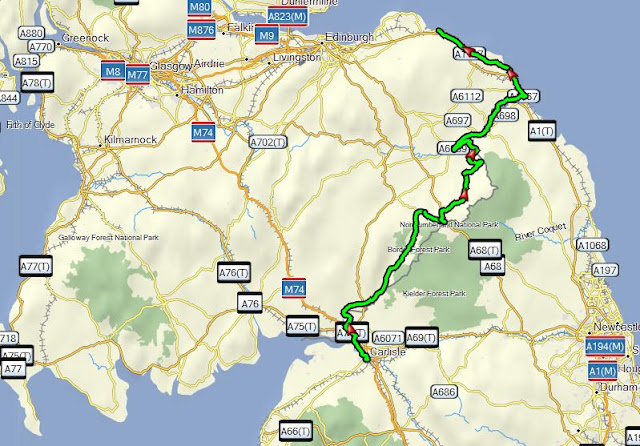