With many negative thoughts still going through my head ( see my last blog entry) I thought I'd try to get in a decent long overnighter to get a measure of my stamina and just to enjoy a bit of a change of scenery. My initial plans were to head out West but the forecast of severe upland gales and persistent showers rather put me off. I therefore opted to head down to the (seemingly permanently) blessed Moray coast again.

The last time I'd ridden down this way was in December and much of the ride was in the dark. I don't mind night riding. In fact, I find it very enjoyable. It's usually less busy, there are fewer distractions and my mind can concentrate in whatever I can see in the little bubble of light provided by my headlamp. This time though, I set off quite a bit earlier and, of course, the days are now longer. Still, i was determined to make a good long ride out of it and was therefore kitted out accordingly.

From home to To Nethybridge along the Speyside Way is now very familiar and seems to go by in no time. From there to to Grantown on Spey seems to take a lot longer on account of the number of gates to be negotiated. I count twelve that I need to open or cross and another similar number that just happen to be open. Crossing the High Street I soon pick up the Dava Way. There are a few steps to climb to get up to railway level and then it's a steady, gradual ascent up to Dava Moor. The scenery change en route, with more greenery, a few wild flowers and some lambs putting in an appearance. Spring seems to be much further advanced here than at the foot of the Cairngorms just a few miles away. 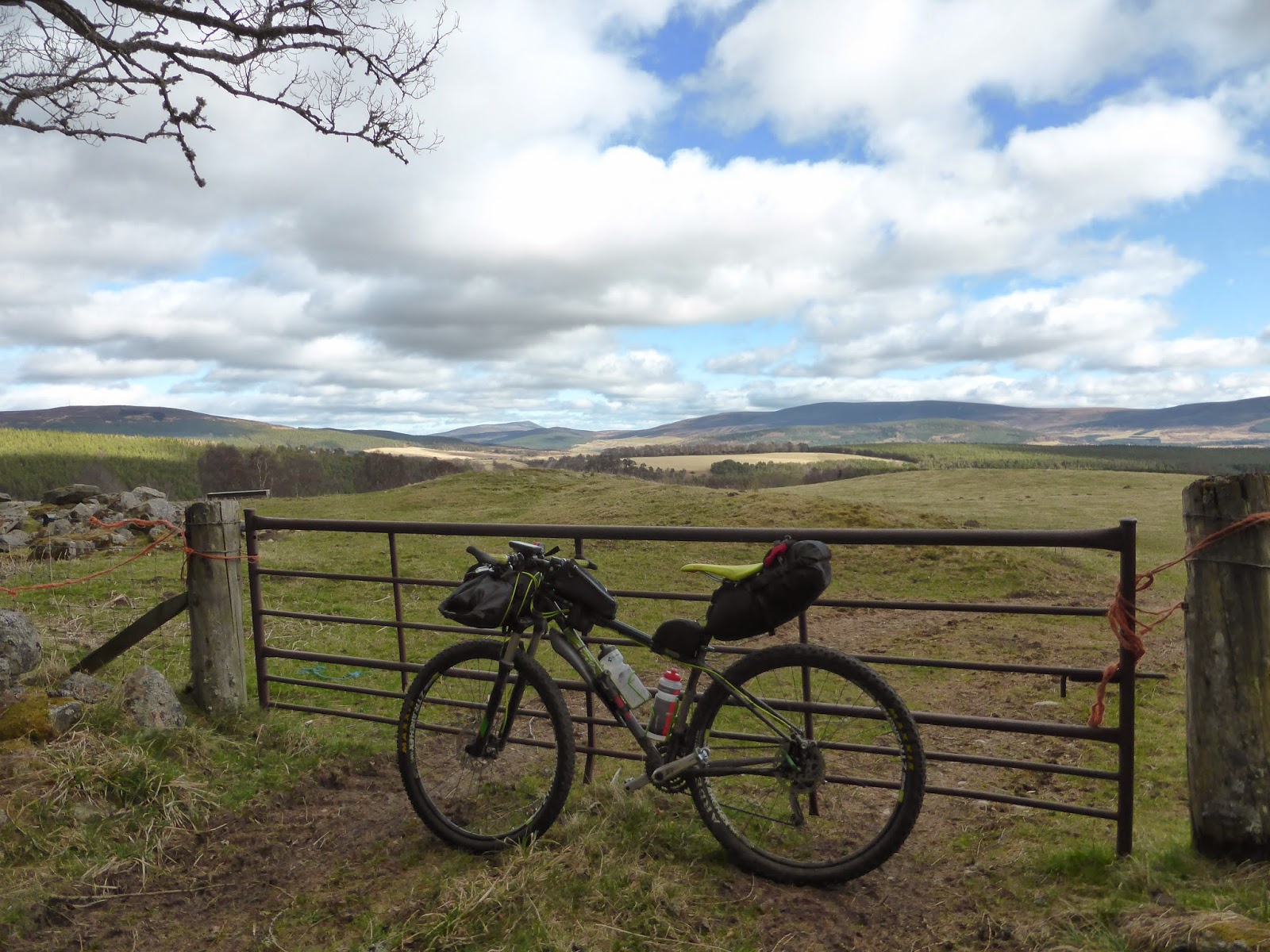 On the way to Forres I notice that the track has been improved in several places since my visit in December. One part that hasn't changed is the large section of gravel railbed just north of the half-way hut. 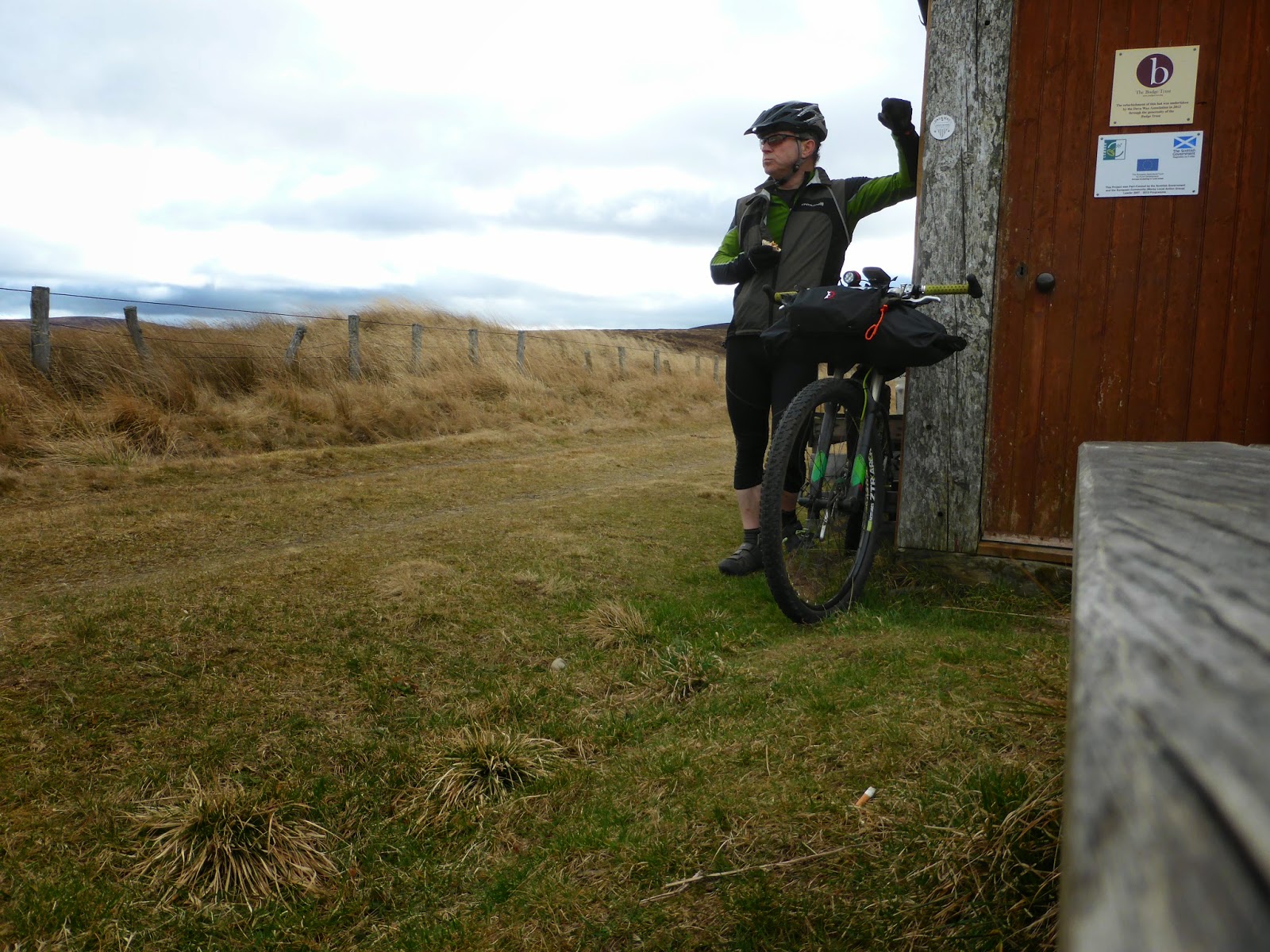 Unfortunately, it's around here that I notice my garmin GPS has managed to eject itself from the handlebar mount. I have to about turn, carefully looking for a grey plastic lump in amongst the large grey chuckies. After a slow three kilometres, I actually find it on a grassy section (go figure). When I re-fit it, I pass the battery cable of my headlight through a little lanyard on the GPS so that it can't fly off again. I take a mental note to attach a piece of bright, dayglo cord to it before my next trip too. 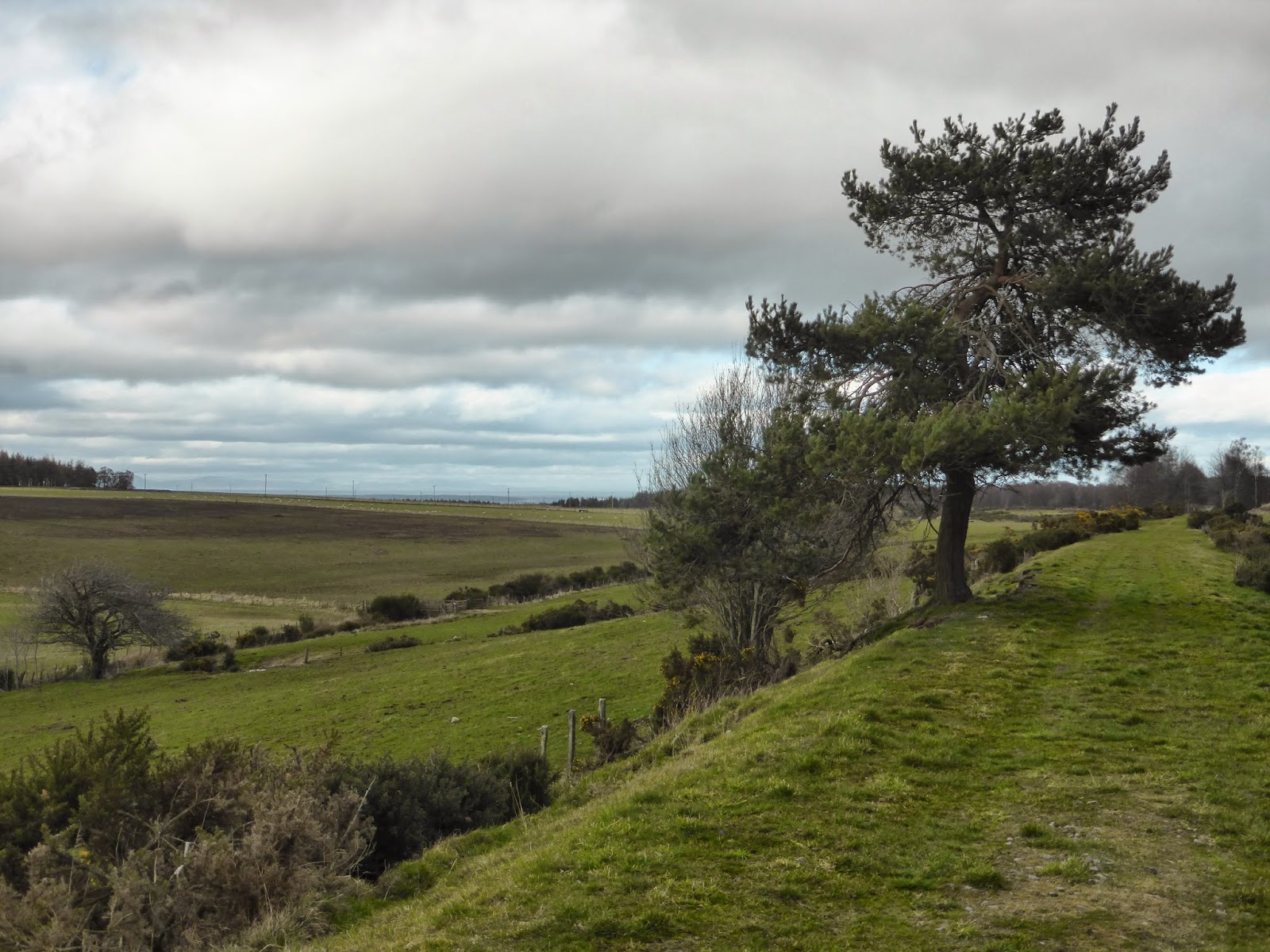 Before long I get my first view of the coast, with Caithness and Morven visible on the far horizon. So far, the wind has mainly been across my path but it starts to feel a lot stronger as I head into Forres. Outside the Co-op I get chatting with another couple of cyclists who've just come west along the coast road and they warn me of the strength of the wind. Luckily for me, I'm heading east!

Just before Kinloss the road passes through some freshly-ploughed fields and the wind is whipping up a genuine sandstorm. It's so bad that, in some places, patches of sand a couple of inches deep has built up. With that in mind, I opt to avoid the section out to Findhorn and along the beach, instead passing RAF Kinloss on the road before heading into the Roseisle Forest. This is the first time I've been here and, although following the Moray Coastal Trail marker signs, I'm spotting lots of promising little tracks heading up and down through the trees. It looks like a great place for a wee visit one day.

That takes me to Burghead with it's regular, but rather confusing, layout and onto the old rail track and then some coastal singletrack that rather reminds me of East Lothian. The sand is, at least, firm enough that I'm not regretting the lack of a fatbike. Approaching the golf course at Covesea the light is beginning to fail and with the lighthouse in view I decide to turn away from the coast and on to the road for the last couple of kilometres to Lossiemouth. Trying to judge how best to juggle the rest of the evening, I decide to find somewhere to eat and then to continue riding later. I actually find dusk by far the most difficult time to cycle, much preferring full dark. Just as I'm about to go into the bistro I catch sight of a full, red moon sneaking across the gap between the horizon and the low cloud. 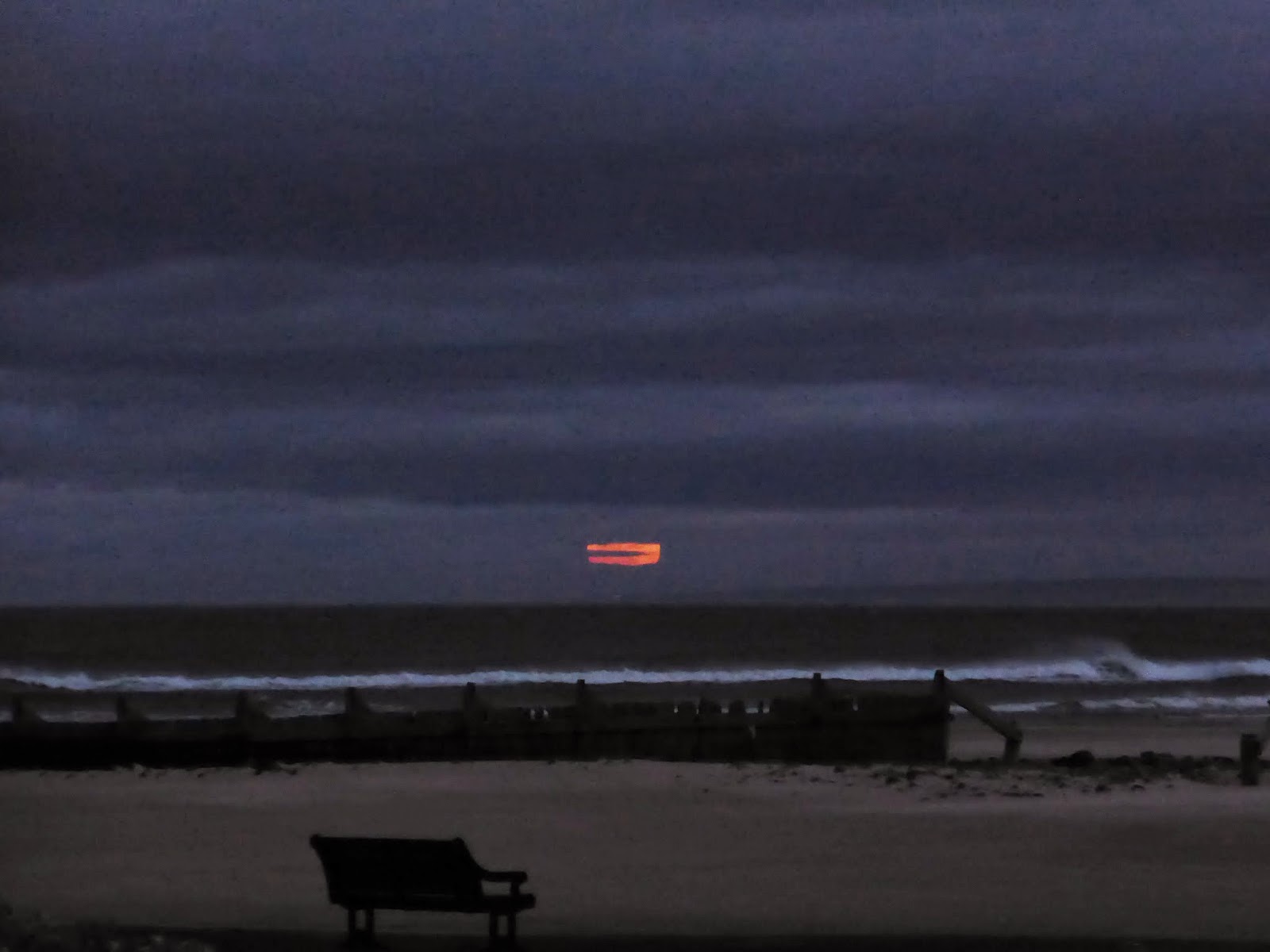 Heading out again after dinner, I rely on a rough sense of direction to take me through and past Lossie Woods, sometimes on forest tracks and sometimes along the foreshore. In the beam of my bike light, the old wartime anti-tank blocks cast weird shadows on the high shingle bank of the beach beyond. Eventually, I see the street lights of Kingston ahead and decide on the spot to give up my plan of camping at the beach and to carry on a bit further, thereby knocking a few miles off the following days ride.

Reaching the bridge over the River Spey, I realise I'm truly on the return leg now and start looking for suitable camping spots. A few pop up in the woods and then I'm very tempted by a lovely, grassy field margin. However, it's in sight of the road and I decide to crack on a bit further. By the time I reach Fochabers, I realise that there are some significant hills coming up and, just in time, I see the Forestry Commission car park at the Ordiequish MTB trails. Perfect! I'll not be on anyones private land and I soon find a decent flat spot in amongst the trees. Once I've cleared away a few fallen branches there's plenty of space for the tent and I spend little time setting it up and getting inside.

It's another windy night, continuing the trend of my last two camping experiences. However, although the trees are amplifying the wind noise, it's quite calm at ground level and I'm tired enough to pop off to sleep almost right away.


The following morning, I awake around 6:30. There's already enough daylight to get up and set off, but I decide just to relax and manage another hour or so of comfortable sleep. A breakfast of homemade porridge-in-a-bag takes little time to prepare, though somewhat longer to eat and it's 8:30 before I'm packed and ready to go. 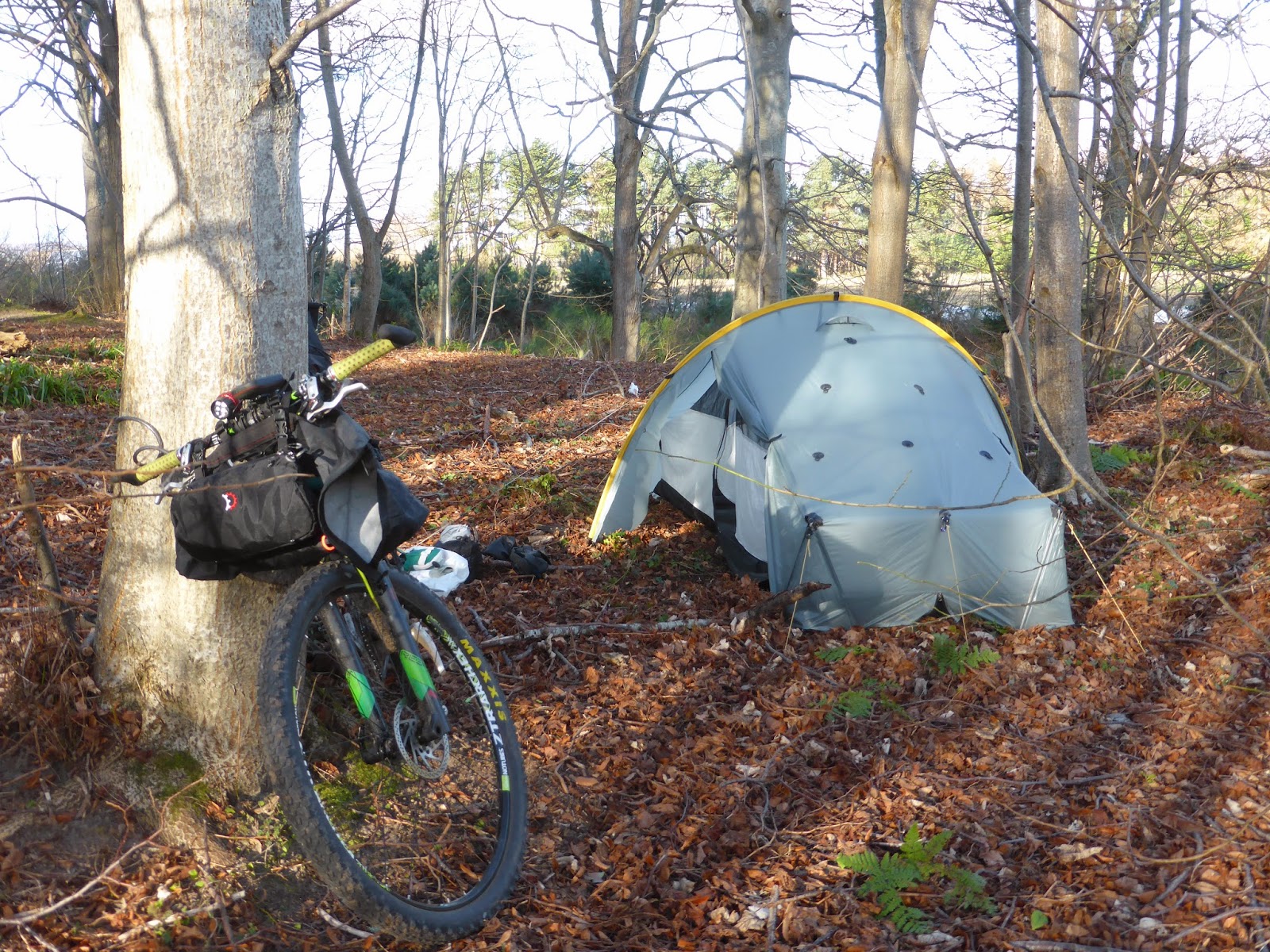 The inevitable consequence of having quit riding just before the hills last night is, of course, that they are the first thing to hit me this morning. That, coupled with the strong south-westerly and cold legs has me crawling along towards the Earth Pillars Viewpoint. I'd already planned to stop here in any case so rode out to the lookout high over the River Spey. I'd seen these pillars from the riverbank last year and, I have to say, they are much more impressive that way. Still, it was great to look out across the river valley on such a fine morning. 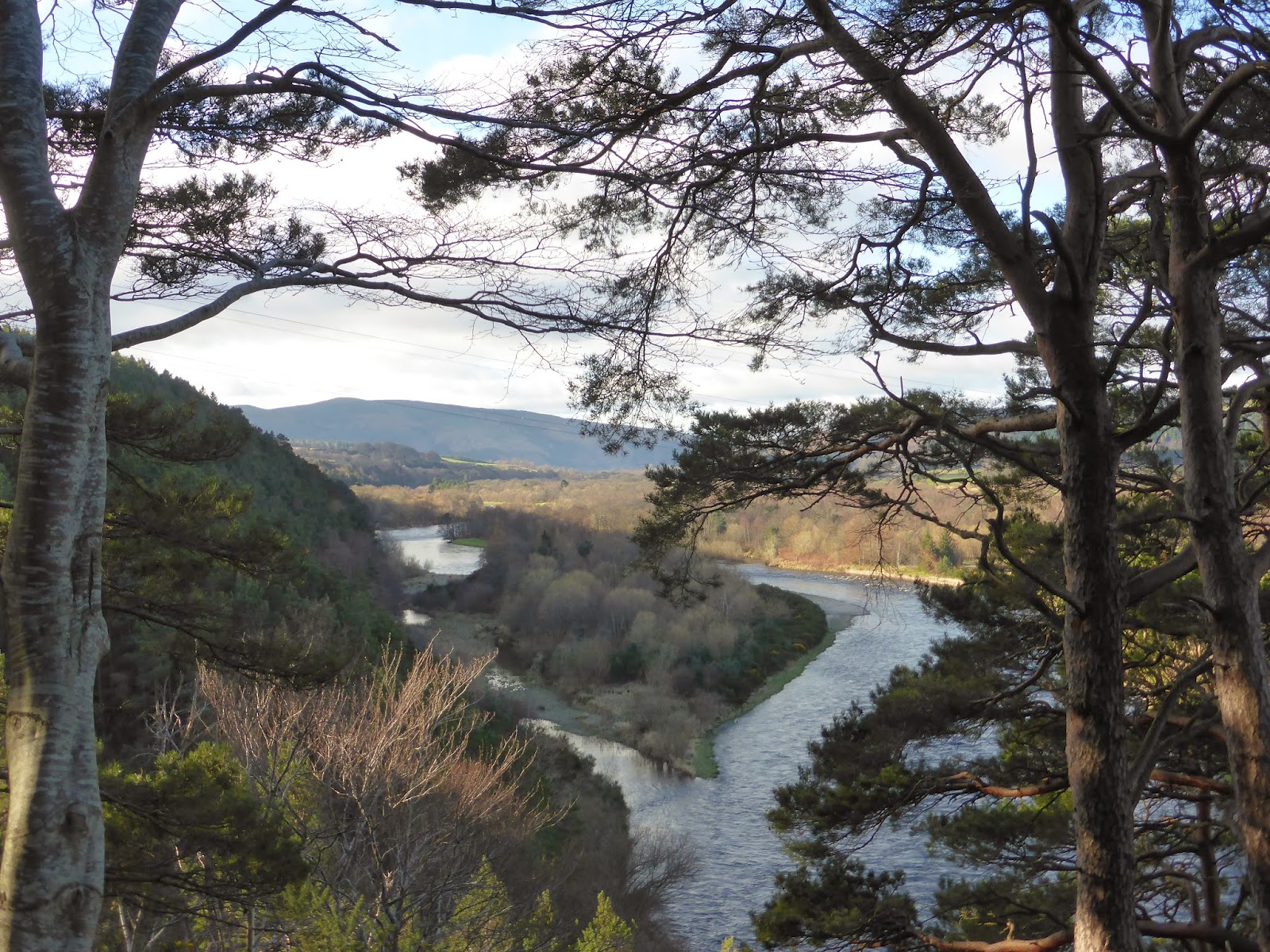 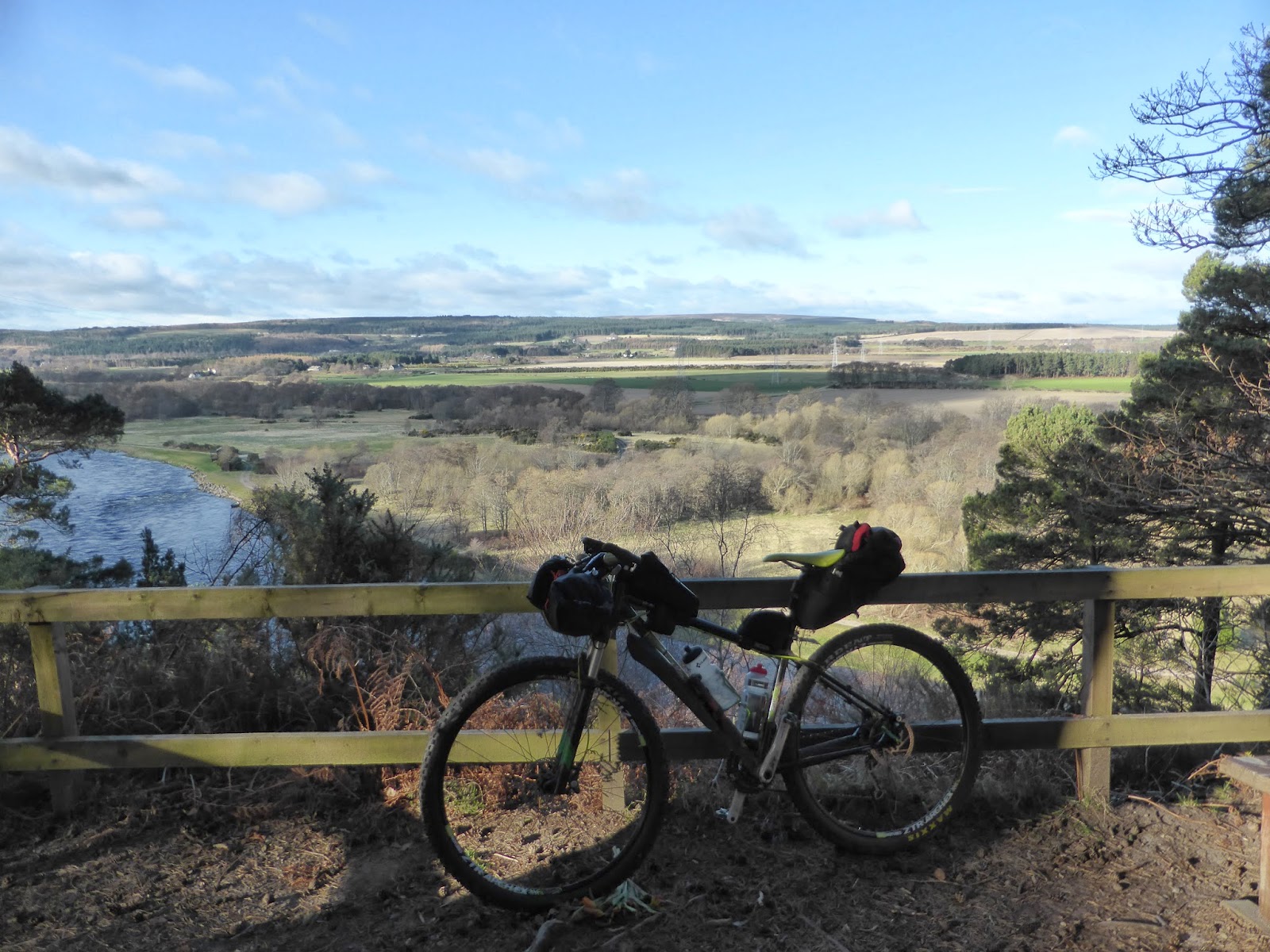 Immediately on re-starting, the road makes a very steep descent and even steeper climb that has me off and walking a short distance. I reckon it's going to be a long day and there's no point in doing myself in so early. By the time I reach the turn off the road at Boat o' Brig and the next major climb around Ben Aigan I've warmed up a good bit and manage almost all of this pedalling. However, I'm still glad to see the last of the big climbs and to start the long descent into Craigellachie. Unfortunately, this coincides with a prolonged shower so I find myself getting cold and wet pretty quickly. Being a bit more familiar with the route hereabouts I decide to stop in Aberlour for some food and, with a couple of cups of coffee and two filled rolls inside me, I'm replenished enough to carry on. 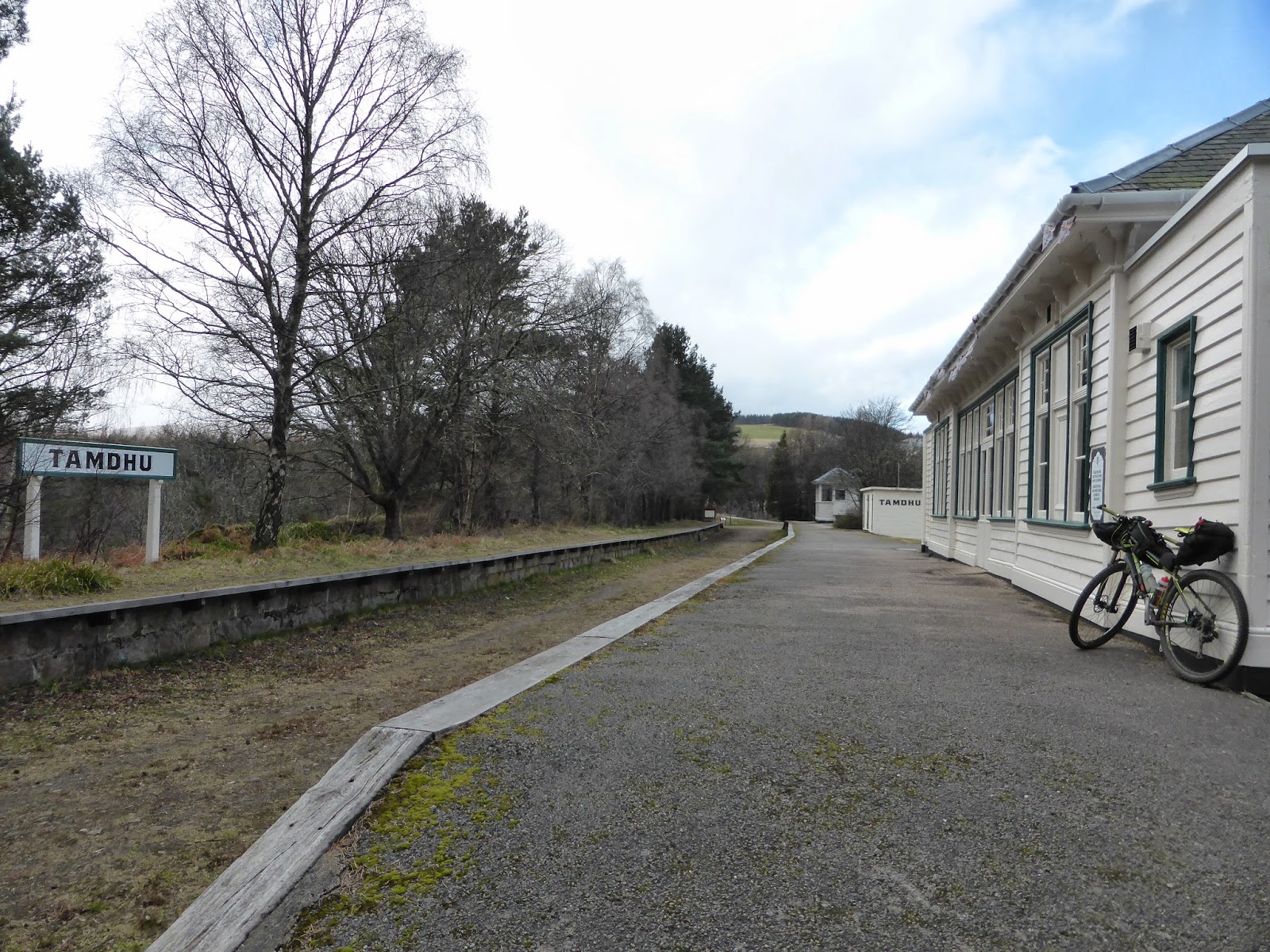 I had expected the valley to shelter me from the strong headwinds but I find that, if anything, it seems to be creating a bit of a funnel effect. As I reach Cragganmore, I have to make another decision. I know that the section of Speyside Way ahead of me is well fenced in, is in poor, muddy condition and has probably the most gates per mile of any track I've ever ridden. The alternative is to stick to the B road on the north side of the river - even though this could be even more exposed to the wind. I eventually opt for the latter, figuring it'll be over sooner!

While the wind remains in my face the whole way, it at least stays pretty dry and the road is a pleasant enough, almost traffic-free cycle. It's only as I'm on the outskirts of Grantown on Spey that I start to wonder if this road is ever going to end and then I hear the call of the Curlew in some fields on my right and my mood is immediately lifted. This sound must be my all-time favourite (perhaps after the buzz of a Hope Pro 2 hub freewheeling down a hill) and takes me right back to many childhood memories. Right on cue, Grantown appears and I wheel along the high street for a final stop of a scone and coffee.

The final section home is just the repeat of my route to here of the day before. It's familiar, fun (after the gated section) and with a last bit of effort I'm soon home.

216km altogether. I'm relatively pleased with my performance, though I know it's mostly been on easy tracks and paths,