After a few delays and false-starts, it's finally happened - I've moved to Aviemore. A move north has been a bit of a dream for a few years now although I had no definite destination in mind. Once we started looking round, we realised that Aviemore and the Cairngorms had almost everything we were looking for - after all, we've been coming on holiday to the area for years!

House removals were done with a bit of help from friends and a few trips in the van. However, I was careful to leave one bike behind as I intended riding up. With everything else done, I had a trip to the estate agent to drop off a set of keys so headed for Edinburgh in the van. Having attended to that duty, I had dinner and drinks with Mark then set off for "home".

It was a bit weird sleeping in an empty house with just a sleeping bag on the floor, especially when the house had recently been full of my belongings. I slept OK though and was up at 6am for a quick spot of breakfast and coffee, then dump the last of my stuff in the van and park it in the street. That left just me, a bike and a minimum of kit to set off just after 7am.

With a lengthy downhill start, I was well wrapped up and soon scooted down towards the airport just as the sun was rising over the Pentland Hills. 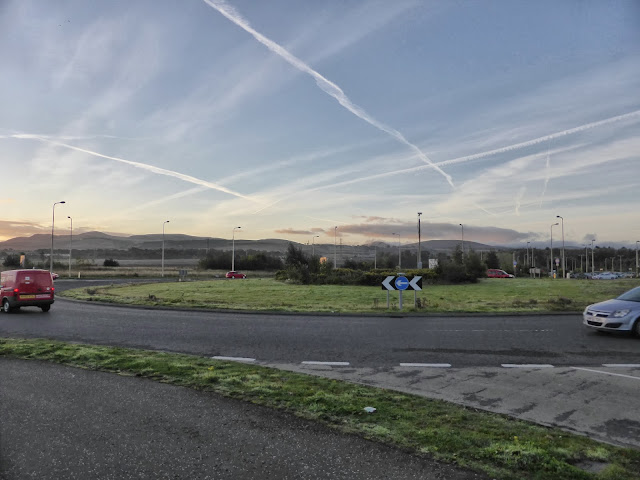 A short spin later and I was on the Forth Road Bridge, slightly amused at the sight of all the commuters heading to work. 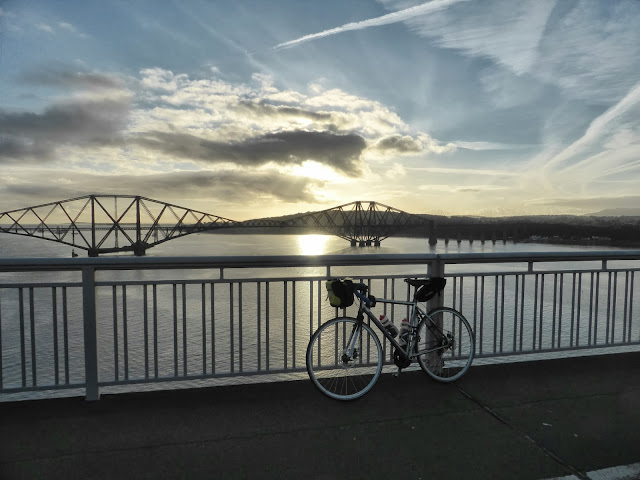 The section across Fife wasn't as tedious as I'd remembered it. Maybe it was just the weather doing its part. By the time I reached Kinross, I was ready for a bite to eat and remembered that I'd previously eaten in Cafe 39 on the main street. Once again, it did not disappoint and I set off replenished for Perth which has always been a significant waypoint for me going north as I feel it is where the Highlands start.

I'd given some thought to what route I would take out of Perth. The most direct approach is to use the cycle path alongside the A9 to Luncarty and then jump on to the main road for a while to Bankfoot. However, being in no particular hurry, I opted to take the signposted NCN77 which was a bit hillier but was pleasant nonetheless. I was already thinking about a second food stop but opted to bypass the Perthshire Visitor Centre at Bankfoot as I'd been in there so many times recently on my various travels to and fro with furniture and other belongings.

Howies Bistro in Dunkeld served up a great coffee and a cream scone to fuel me on the next stage where I had once again opted to stick with the main NCN cycle route. This starts by heading past the hotel and a rather rough forest track. Still, at least it wasn't muddy and the 28mm Marathons coped with it just fine. From here to Pitlochry it's all quiet roads and once Logierait was reached I was on familiar ground as I'd cycled this as part of the Etape Caledonia. The hills along here weren't as bad as I remembered. Perhaps it was the gearing on the Amazon or that I had just been taking things a bit easier up to this point.

A brief detour in Pitlochry took me to Escape Route Cycles. I'd been hearing the noisy grinding of my chain all morning and my mechanical sympathies forced me to buy and apply some chain lube. I also bought a spare Powerlock chain link. I'd noticed I'd somehow forgotten to pack one and it had been praying on my mind all morning. With the prospect of the path over Drumochter to come, I thought it was best to correct that oversight. 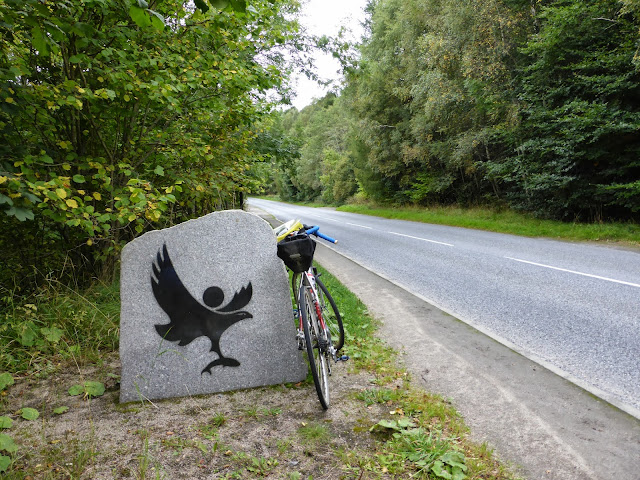 In Blair Atholl roughly on schedule, it was time for another food stop to provide some reserves for the next, exposed, section. The Watermill was fairly quiet (for a change) and I had an excellent bagel. The warning at the start of the cycle path in Calvine is a little over the top!! 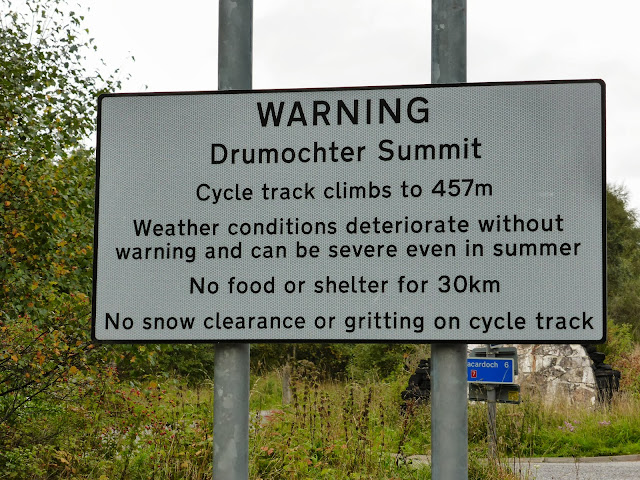 From here, it's a steady climb up to Drumochter Summit and for much of the ride you are far enough away from the A9 that you can enjoy the old road. Once Dalnacardoch and the "new" cycle path are reached though you are constantly aware of the traffic.

Symbolic milestones passed quickly along here. With just over 100 miles done, I passed the hillside that marks the geographic centre of Scotland. After 7 hours of cycling, I could really say I was now in the North of Scotland. A little later, it's the high point of Drumochter Summit and then, finally, the signpost indicating the start of Highland Region. 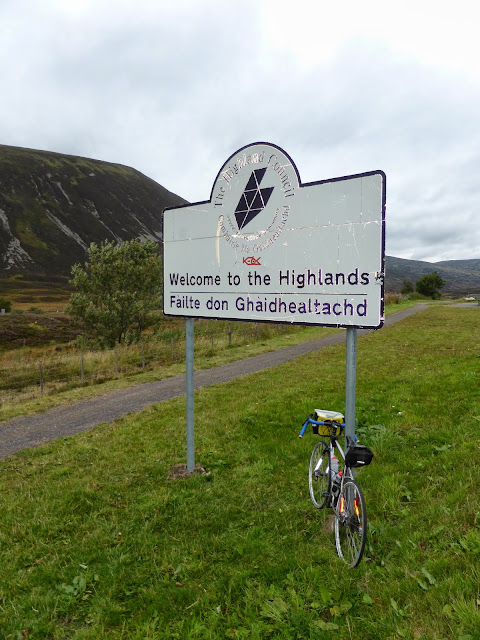 I was actually a little emotional at this point. After years of being a visitor, here I was on my way to being a resident. It's like a dream come true and I really felt that I'd followed my heart to be here.


Ironically, given I was supposed to have left the traffic of the "big city" behind me, I was rather surprised to see the road completely stopped up, with cars sitting, engines switched off in some sort of road closure. As I whizzed along the now mostly downhill cycle path I received various jealous comments from car, bus and lorry drivers. Luckily, the accident that had caused the closure hadn't resulted in any fatalities (this time) and the road was being cleared just as I passed the spot.

I was more interested in the way forward and, as the light started to fade, drew into the Ralia Cafe for a final rest, coffee and food. With so little distance left to travel, I was happy to take my time. I'd thought about rushing along to beat the sunset but I've really taken to riding in the evenings and in the dark so I was happy to see the sun dropping below the ridge of hills, switch the lights on and head through Newtonmore and Kingussie. 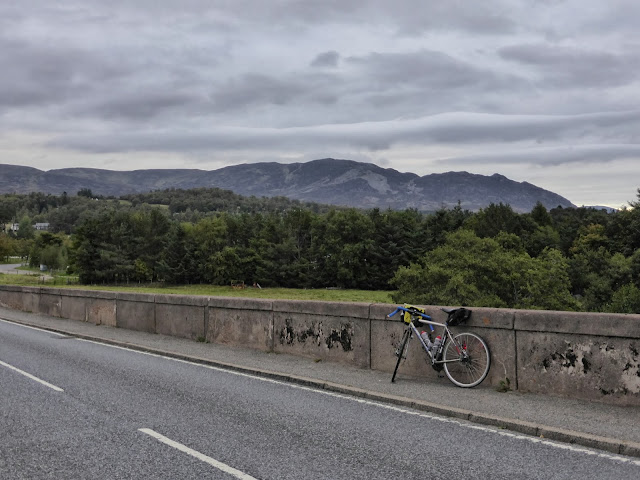 It was all feeling quite effortless now, spinning along in the twilight and thinking of the fact that I was actually heading home. By the time I saw the lights of Aviemore I was feeling quite elated. 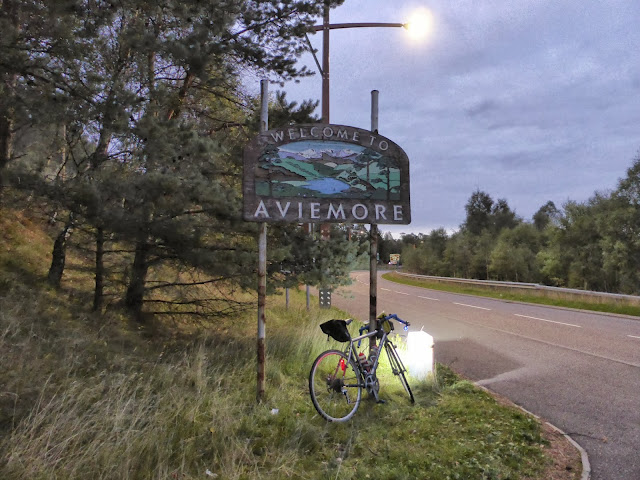 So, that's it. After 50+ years of living in and around Edinburgh I've finally relocated. The house isn't the wee, rural cottage I'd imagined but having weighed up all the options we have a terrific location, great views and so much on our doorstep. No wonder we've returned to the Cairngorms time and time again. The one downside is that we'll have to find somewhere different to go on holiday!!


Now the skylines reach my eyes
The ridge stands out in Highland skies
I just can't believe I'm going home
Posted by Scotroutes at 13:23