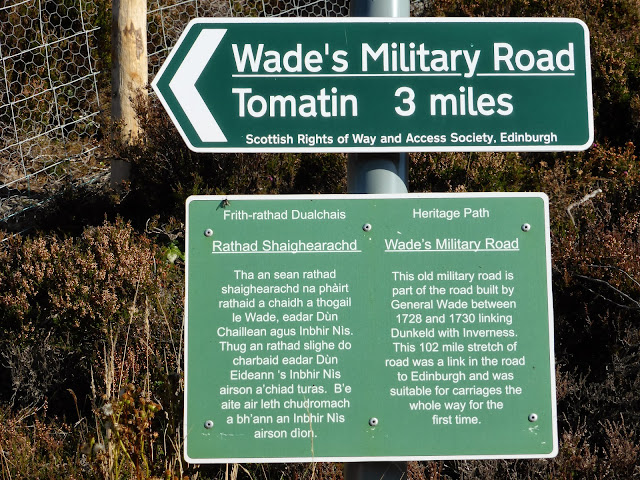 In an effort to resuscitate my relationship with Scotways after a summer in which I've neglected my route surveying - and with a bit of a more selfish wish to follow through on an old project of my own - I recently cycled the old military road from Aviemore over the Slochd to near Tomatin. I'd already been over a bit of the route a few years ago and was always fascinated by the sight of the old road at my start and finish points.

For those that are unfamiliar with the military roads in Scotland, a bit of background; they are often attributed to General Wade who was tasked with improving the lines of communication in Scotland after the first Jacobite rebellion. He was followed by Major William Caulfield, whom history has rather forgotten. Of course, other older - and newer - military roads also exist and both Wade and Caulfield were often happy to use existing routes through the Highlands as a base for their roads.

My introduction to these old roads was via my father who would often tell us when we were driving along sections that have now been used as the alignment for the modern roads. Most folk who've driven anywhere in Scotland will have been along one section or another, especially if you've ever been on the A9. He was always fascinated by their "antiquity" and I guess he passed that on to me. Of course, being a keen walker and cyclist, I've been able to find more sections than he ever knew existed.

One of the issues with 300-year old roads is that most have gradually been over-laid, dug up, planted with trees or built on. It's therefore great to come across a section that is still largely intact, or at least where the existing line is both visible and can be followed on foot or on bike.

As the section nearest Aviemore is now split by the A9 I headed onto the Wade Road from the access track to Kinveachy Lodge. the old route is plainly visible, though now barely used.


Like the Romans before him, Wade was keen to follow straight lines where possible so while he new track winds up in a couple of bends, Wade just goes straight up the hill. By paying close attention to the map I found the first confusing junction and headed further uphill, further away from any traffic noise.

From here, the road carries on over some lovely, lonely countryside now bypassed by the more modern re-alignment of the road through and past Carrbridge. The route is briefly shared with an off-road alternative to National Cycle Network (NCN) route 7, including the use of the bridge at Sluggan.


Where the two diverge at Insharn, the Wade route has a short, steeper climb through a bit of forest before coming out higher up and presenting an open view of the Slochd.


A short descent over the Inverness-Perth railway line brought me back down to the old A9 and then it was a bit of a wait getting across the new A9.

Up until this point, the track has all been easy cycling so I was looking forward to the last few miles down to Raigbeg. It all started easily enough, with a new track joining up with the alignment of the old Wade Road near one of the numerous marker stones that infrequently mark the route.


Those travelling South would have had their first view of the Cairngorms from here and I can imagine the mix of awe and dread at seeing this during winter.


The track here is now used for access to a telecommunications mast so is in good condition as it crosses the spine of the hill, away form the noise of the traffic on the A9. Shortly though, the Wade Road becomes not much more than a depression in the heather.


I managed to cycle most of it - through wishing I'd had the benefit of the Fatbikes 4" tyres - but it eventually defeated me as the depression got deeper, the ground got softer and the gorse got thicker.


A short diversion onto the shorter heather alongside got me almost all the way down to Raigbeg where the old road re-asserts itself at another marker stone.


From here, it's a short ride down to the houses at Raigbeg and along to Tomatin.


It's such a shame that there's a short unrideable section near the end of this route as it otherwise provides a pleasant off-road extension to NCN7 down to Tomatin but other than that it's a great way to get some idea of what General Wade was thinking when he was given the job of creating a road network for the Highlands. That he was held in high regard for his work, we can be in doubt. After all, he even made it into a version of the National Anthem....


Lord, Grant that Marshal Wade,
May by thy mighty aid,
Victory bring.
May he sedition hush,
and like a torrent rush,
Rebellious Scots to crush,
God save the King.

For those looking to sample some of this for themselves, the complete route description can be found on the ScotWays Heritage Paths website here.
Posted by Scotroutes at 12:48