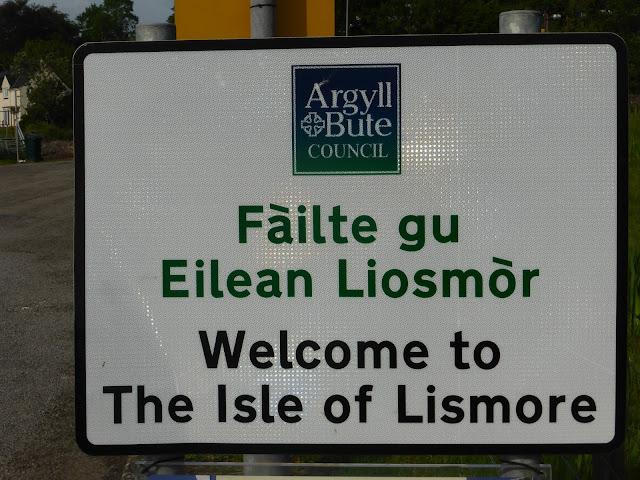 Don't you just love it when a plan comes together and you can combine all sorts of things you wanted to do into a ride? The Isle of Lismore had come to my attention through working at Ticket to Ride, when one of the holidays we supported took that route to Oban rather than riding through Benderloch and Connel. Always keen to include a ferry (or two) in a ride, that looked rather appealing. I've also log had a hankering to cycle down the main road into Glencoe, with those wonderful mountains on each side. A bit of map work and I managed to come up with a 150km loop that would also give me a June bivvy opportunity.

An early morning start from home was required to get me to my start point at Bridge of Orchy so everything was prepped and packed the night before. The weather had been pretty foul for the past week or more so I was doing a lot of last-minute kit replacement as the forecast developed. Leaving he van though, I was finally committed and set off on the Amazon towards Forest Lodge and the West Highland Way.


I've walked this section of the WHW a couple of times but couldn't remember how rough it was likely to be. The initial "cobbled" bit was tedious and bumpy with no suspension, but it got much rougher as the highest point of the route was reached and I started the descent to the White Corries. I cajoled the Amazon down the track, trying to avoid the biggest boulders and soon made it to the ski area where I felt a second breakfast was in order.

The sun was putting in the best show it had for a while as I started along the A82 towards Glencoe. This was just how I'd dreamed/imagine it would be - a bit of a tailwind, bright blue skies, warm air and friendly traffic as I swooped further between the mountains. I was on a real high by the time I turned off the A82 past the Clachaig Inn and along the old road to Glencoe Village.


From here, I was able to avoid the main road almost completely. The cycle track took me to Ballachullish where I picked up NCN78 (The Caledonian Way) southwards. This takes a great route along the seafront at times, giving great views across to Ardgour and Morvern.


My plan had been to catch the 16:00 ferry from Port Appin, but checking the time I saw that I was well ahead of that schedule and wold easily make the 15:00. However, I was enjoying myself so much, and the pedalling was so easy, that I decided to put in a little bit more effort and try for the 14:00. That would get me onto Lismore in time for the cafe and shop.  As it was, I was a wee bit early so had time to chill before boarding the quaint wee craft that serves as the Port Appin Ferry.


My first impressions of Lismore were that it is very, very green. It's also very relaxed and friendly and on my short ride to the Heritage Centre and Cafe I encountered loads of folk out walking and cycling on the one road that runs through the spine of the island.

It was clouding over a bit as I reached the cafe but it was still more than warm enough to be sitting outside and relaxing over my food. I'd got here early and now basically had little to do other than find a spot to camp and chill for the evening.

Finding a camp spot actually proved to be rather more difficult than I'd anticipated. Lismore basically has one road, lined with fields of sheep and the occasional nice wee house and every track leading off the road goes to a farm or other house. Neither was there much in the way of tree cover to hide behind. I found a spot almost at the South end of the island where I had no fence to cross, there was only one farm past me and I could be a little way off the road. Furthermore, it had an excellent view North, East and South. I had a couple of other areas I'd thought about trying, and it was still fairly early (especially given it doesn't get dark until 23:00) but I was happy with where I was and to just chill out rather than searching around.

When I first arrived, the few sheep in the area wandered off. By the time I had the tent up and was lying in it having a wee rest, they were getting a bit more brave again. A little later, they would just ignore me as if I had been there forever.

With only the sound of a few birds and the munching of the sheep to distract me, I settled down with some food and the hipflask and just watched as the evening slowly descended across the mainland. There was a big cruise ship (later found out it was the Queen Victoria) anchored just off Oban with a PA system that was threatening to spoil my solitude but it sailed off into the sunset.


Sleep was interrupted by the sound of rain on the tent and a feeling that I was lying on the ground. Actually the ground, not my mat. It turned out that the mat had deflated slightly. This can appear to happen when the ground is very cold but in this instance I was concerned that there might be a small leak. In any case, a few breaths and it was back to being firm again, though it had softened again by the time I got up in the morning.

Thankfully, the overnight rain had stopped by the time I got up and, other than having to pack a wet tent, didn't cause me any problems. The sun was already getting warm as I made my way to the other ferry terminal for the "big" ferry to Oban. Again, I was a wee bit early, giving me time to have a mooch around.

Coming off the ferry at 10:00 I was already feeling peckish so made for one of Obans many outdoor cafes. In my brief time there I had one foreign gentleman asking me all about my Bearbones riding jersey, asking what shop he could buy one from, another cyclist heading to Barra amazed that I had all my tent, sleeping and cooking gear in the few bags strapped on the bike, and an older motorcyclist impressed with the fact I was pedalling the whole 160km route.

When I'd ridden all of NCN78 in a day, I'd skipped the little spur into Oban as I headed North. Today made me realise just how good an idea that had been as it's a fair old pech heading into the hinterland from sea level. Lovely roads though, with little traffic. This time, when I hit Taynuilt, it was on to the main road towards Dalmally. That meant I was now having to deal with some faster traffic but, other than one dodgy overtake at Loch Awe, it was all fairly relaxing stuff.

Just before pulling into Glen Orchy, the heavens opened. I had seen the black cloud approaching for some time but I could also see the end of it and realised that it wasn't worth even stopping to put waterproofs on. Glen Orchy again put me onto quieter roads. I'd driven this road before and can't say it made much of an impression on me, but cycling it, with the decent weather, it turns out it's really, really, nice. The river is full of interesting pools and falls and there's even the most southerly remnant of the old Caledonian Pine Forest. In fact, I was enjoying it so much that I was finding any excuse just to stop and delay getting back to the van to finish what had been a really good ride.

Summary: I went for a ride. Not much happened. It wasn't an "Epic". It was great!